What We Did For Valentine’s Day (Part 2)

While going out for the first time in months was a great experience.  What has been even better is getting Eli his new brace.  We started out with the Mitchell Bar (essentially one solid piece of metal that locks his legs together - it’s like a straight jacket for his feet.)   This bar seems seems to work well for a lot of kids.  But definitely not for Eli.  He went from being a happy baby, to crying non-stop. And worse - he actually stopped eating for a few days, and it was all we could do to get him to eat any food.
Unfortunately we had many problems with the brace shop (the company responsible for fitting and manufacturing Eli’s braces) and it took us about a month to get the new brace.  This meant that we had several weeks of no sleep, extreme fussiness, and exhaustion.   Both on the part of Eli and ourselves!
But all that changed on Valentine’s morning when Eli got his new braces.  In the past, doing anything to his feet, whether it was the Mitchell bar, or just getting new casts, meant that Eli would spend the next 24 hours screaming, with big alligator tears rolling down his cheeks.  Talk about heartbreaking! But with the new braces, he cried for about 5 minutes while he was fitted, and that was it. 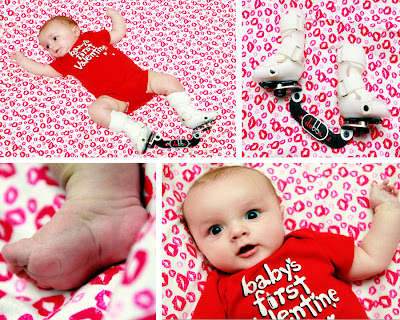 It was love (or at least tolerance) at first sight!
Of course that’s the genius of the new brace (called a Dobbs bar).  The Dobbs bar allows Eli to bend his knees and move his legs independently of each other.   In fact, he spends most of the day kicking his legs! Something that we never hoped would be possible.
After everything he’s been through, I don’t think I’ll ever get tired of seeing him kick his legs.
And frankly, this was the best part of our Valentine’s day.
Posted by Eric Barrett at 10:50 AM