The End of An Era: Saying Goodbye to Daily Bracing!

3 years, 3 months, and 2 weeks and 6 days  after we started Eli's treatment for bilateral clubfoot, we are finally DONE with daily brace wear!  For those of you counting at home, that is nearly 9 months earlier than we were originally told our treatment would take! 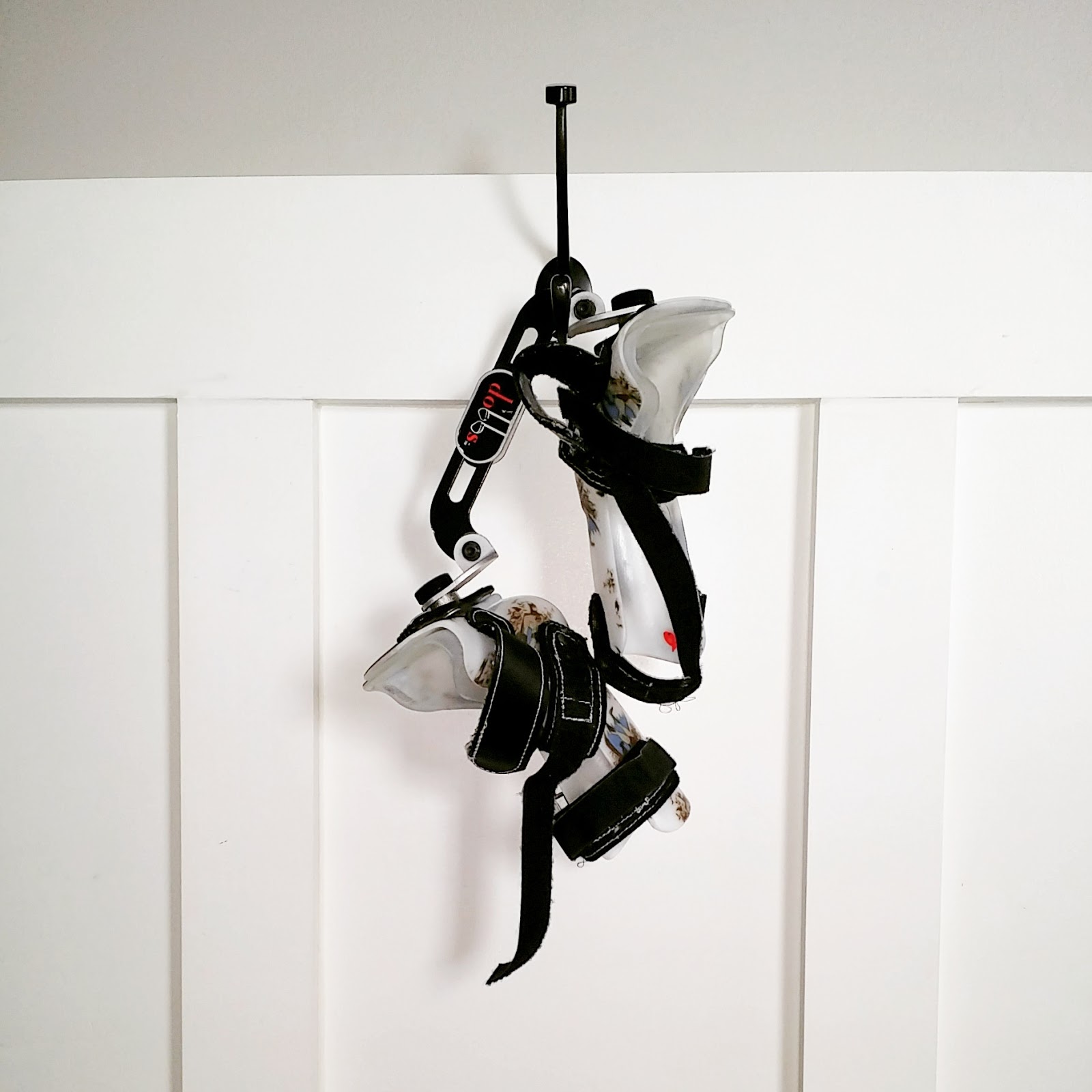 In the last few weeks it seemed like Eli had been packing away the food. We are talking 2 to 3 breakfasts, a few lunches, and then multiple snacks before and after a full dinner. We knew he was getting ready to hit a huge growth spurt but I'm not sure Eric and I expected such a HUGE growth spurt!  One day his braces fit, the next we couldn't get them on without Eli being in a lot of pain :(

So we ended up letting Eli sleep without his braces that night (because everyone loves sleep in our house :)) I finally called Dr. Mehlman's office the next day and left a message to get a new prescription.

The phone call came in as I was working with a few students in my office. Thinking this was just a call letting me know they sent the prescription for new braces over to JF Rowley (the company who takes care of Eli's braces) I answered. When the nurse said that Dr. Mehlman was happy with Eli's feet if we were happy with Eli's feet and we could discontinue bracing, I started sobbing. Uncontrolled tears soaked my desk.

Just the day before we had been told that our unborn son would be born with clubfoot just like Eli. Emotions were raw and admittedly I was annoyed that we would not be getting a break from clubfoot treatment for another 4 years. Having this 5 month break from treatment, brace fittings, and bracing overnight has been nothing short of a huge boost of wind in my sails. It's like God knew exactly the type of rest we needed so we could prepare to work our butts off to be able to give our all to #3's treatment.

For me, one of the hardest things, when shopping for Eli was the whole pajama issue. When Eli was in casts, the casts were too thick and bulky for any kind of traditional sleep sacks. When Eli was in braces, he always had to wear pajamas without feet. Early on, I remember frequently calling or texting friends in tears, because I couldn't find pajamas that would work with Eli's braces. I would be so envious of parents posting pictures of their kids in adorable footed pajamas, not knowing how luckily they were that they didn't have to order thier kids pj's online or have to travel to three different stores to find something in your son's size. At one point Eli had to sleep in girls nightgowns because we were so desperate :( (Hopefully we haven't caused permanent scares :) )

Naturally the first thing I did after calling my husband was head to the store to buy Eli his very first pair of footed pajamas. (I am fairly certain the people at the store thought I was a crazy hot mess as I am crying at check out, taking pictures of the jammies on the conveyer belt to send to everyone I know :) )

The best part about the entire experience was getting to watch Eli's reaction to the new jammies :)

And here you have it, the best picture ever, my boy basking in the glow joy of wearing footed jammies for the first time ever with his big sister who, of course, wanted to join in the celebration by wearing some as well. Best. Day. Ever. 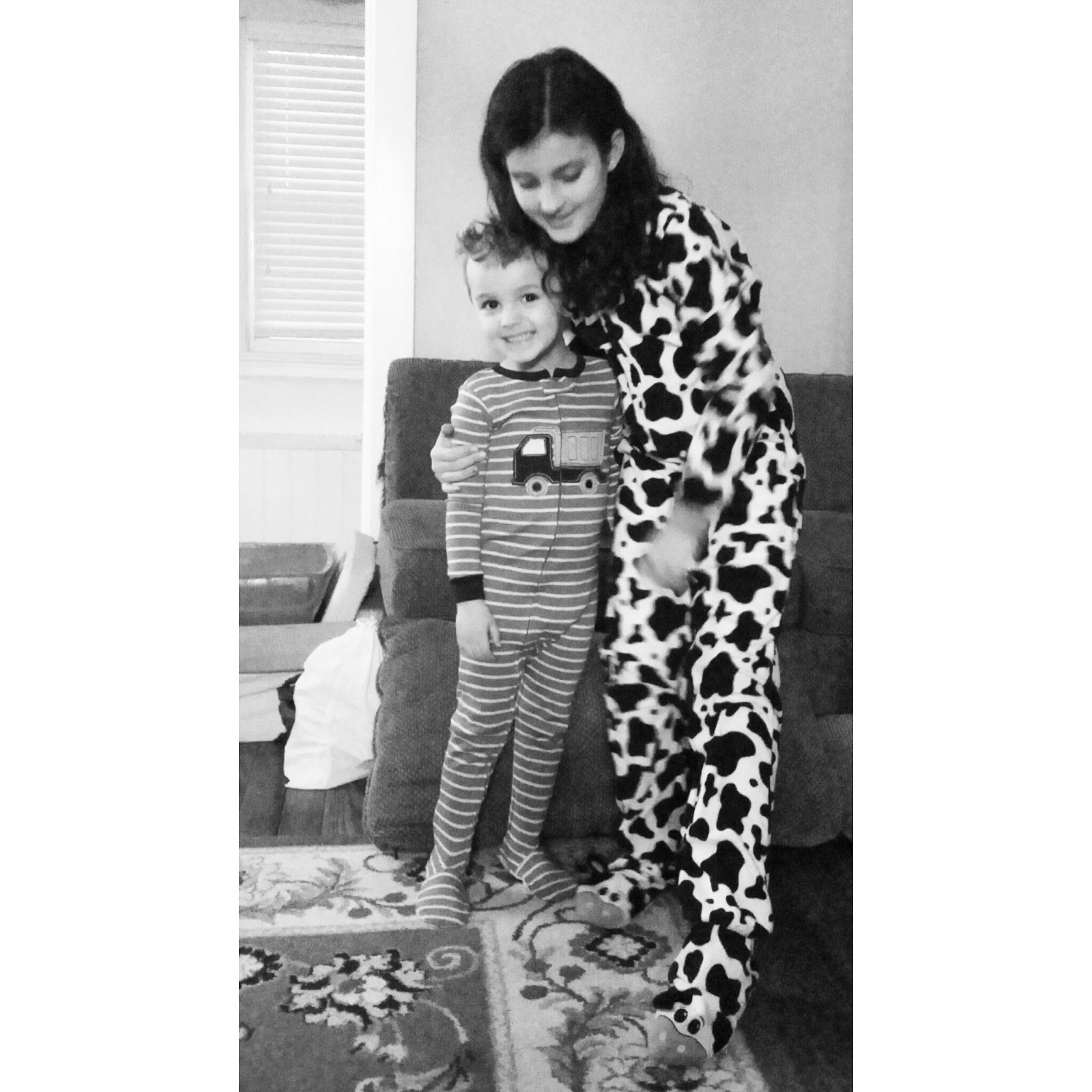 Doctors had warned us that Eli might have a hard time transitioning out of nightly brace wear and might go through some sleep issues with his braces but, Eli hasn't turned back. Every night since, he has told us before bed, "I no need to wear my braces Daddy."

After all the other challenges we have faced surrounding his treatment, I guess we got lucky :)

2 Timothy 4:7
I have fought the good fight, I have finished the race, I have kept the faith.

After a really long break from the blog, we have decided to revive it! And with some pretty good reason :) Many of our readers have reached out, for advice, support, and to connect. I've felt a tug at my heart for several months now to get this blog going again, so here we go... 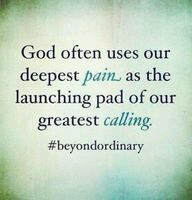 The last week has been one of wonderful highs and the lowest of lows. In November, we were surprised and excited to find out there would be another baby Barrett joining the family :)!  After 3 heartbreaking miscarriages, we were over the moon to make it through the first trimester without a hitch so we announced the pregnancy on our Facebook page the best way we knew how: Super Hero style! 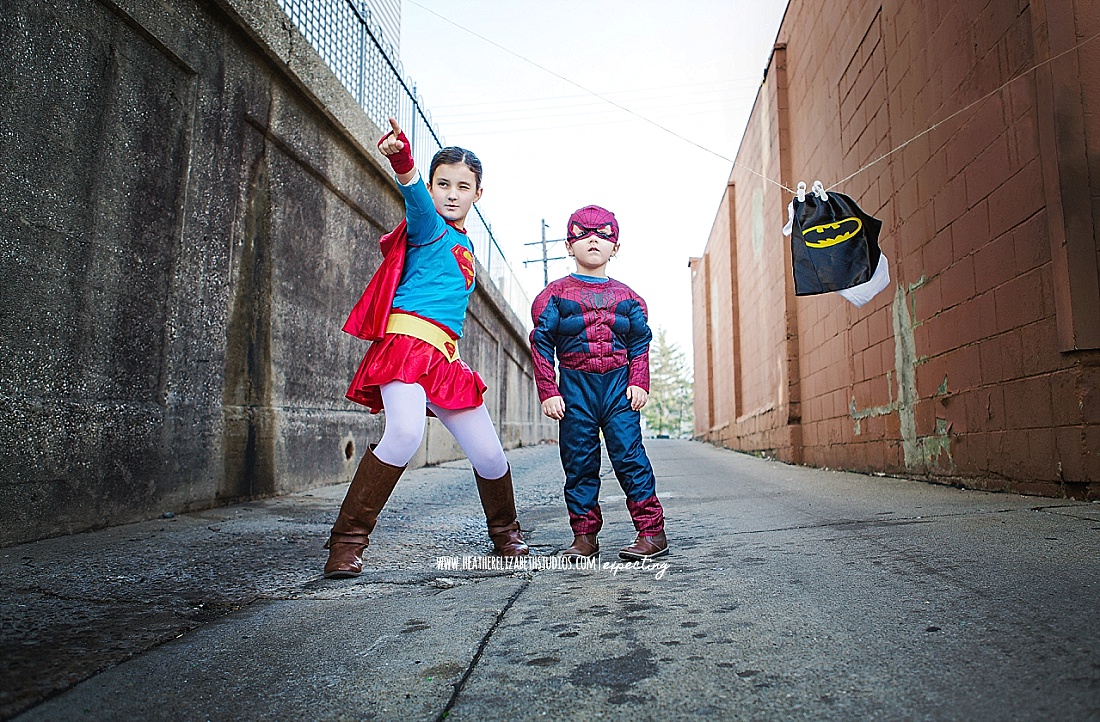 The one lingering fear remaining was the 20 week ultrasound. After such a tough and heartbreaking journey with Eli, we were hoping and praying we would dodge another child with clubfoot. As the date approached I could feel the anxiety and excitement welling up in my chest causing me to break down in tears randomly throughout the day. In my defense, pregnancy hormones were doing me no favors! HA!

Going into our ultrasound last Monday I probably cried no less than 6 times before our 10 am appointment. I played the scene over and over in my mind: The ultrasound tech would put the camera on my belly and the first thing we would see would be perfectly straight feet and capture the perfect shot that I could post all over social media praising God's faithfulness to us. A well deserved gift after 3 years and 5 months of trips to Children's hospital right?! It's always good to tell God what you deserve for your suffering right ;)?!

Unfortunately that just wasn't the case. The ultrasound tech put the camera on my belly and the first thing we saw (immediately!) was that we were going to have another SON & best buddy for Eli!!! 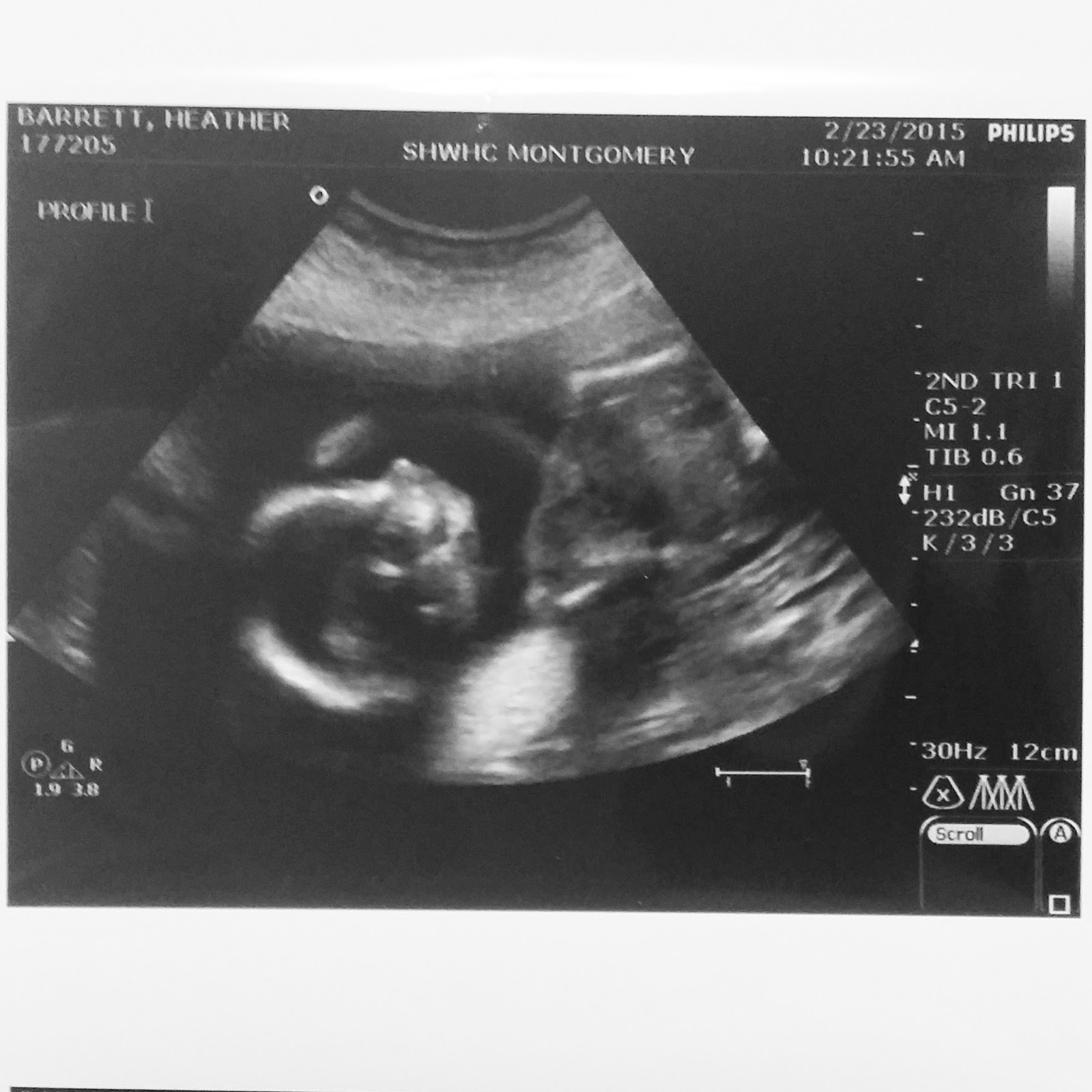 It didn't take us long to also realize that we would also be having another son with clubfoot :( The tech would neither confirm or deny what both Eric and I clearly saw on the screen.

At the end of our appointment, the ultrasound tech said those dreaded words, "A doctor will be calling you in a day or two to go over the results." Two days later, we got the call confirming our fear: a left clubfoot and uncertainty  of the right foot being clubbed as it wasn't visable in the ultrasound.

This week has been a heartbreaking and gut wrenching roller-coaster ride . We are teetering on the verge of joy and sadness at any given moment. Neither Eric and I would change a thing about our journey with Eli. Our parenting is better, our marriage is better than either of us ever could have imagined it being, and we have been able to appreciate each milestone Eli has been able to accomplish on a much deeper level. We just wanted to be able to enjoy a typically developing baby's too :)

So, many have asked, how can you help?

1. Celebrate with us. Mourn with us. We are thrilled to have a son and children are such a gift (I'd have 10 if i could :)) but we are also deeply saddened that we will be watching another one of our children suffer through casting, bracing, & therapy. It's ok to just say, "I'm sorry. That's really horrible." Because it is. For us, clubfoot isn't always just clubfoot. For Eli, it was an indicator of a much bigger problem that has resulted in 6 surgeries and 7 specialists that we see on a regular basis. So, even though "we know what we are doing and are experts" we are concerned about what further testing  in a few weeks might reveal.

2. Pray that our son is healed. Baby Barrett is currently breach and he had himself crammed into a corner of my uterus. Our doctor really wants this guy head down to give those legs a chance to stretch out :)

3. Pray that God sustains us. We are weary.  We are tired of specials visits, surgeries, and trips to Children's. We are emotionally spent. It's hard to imagine starting this all over again and going strong for another 4 years.

Thanks friends for your love and prayers. They mean the world to us <3

Jeremiah 29:11-13
For I know the plans I have for you,” declares the Lord, “plans to prosper you and not to harm you, plans to give you hope and a future.