Guest Post: Moving to a big kid/toddler bed with a club foot brace 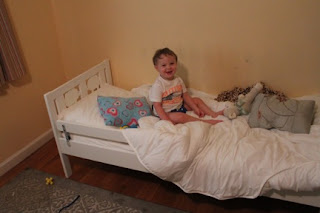 When searching the internet or message boards for advice regarding club foot and treatments, you never seem to see much information past getting the brace.  It's like all the materials just magically fast forward a couple of years.  Even in Dr. Ponsetti's official stuff it is almost like those toddler years are just a side note.  But since I am in the middle of this stage, I wanted to report on what it is like to have a very active toddler wearing a brace at night, and how our recent transition to a big boy bed went.

I had been fielding questions from family and friends for a little while about when we would be moving our 20 month old son Jamie out of his crib.  And to be honest, I wanted him to stay in the crib as long as possible, first and foremost, because it meant that he was still my baby.  Once he moved into a real bed that was just one more reminder of how he was growing up too fast.  Selfish reasons aside, the other primary reason was I couldn't imagine how my energetic monkey of a child would do in a bed with hardware strapped to his feet.  I was afraid that he would fall out and hurt himself, get tangled in the covers, or try to walk across the room and wake us up in a fit of screaming.

Jamie was not concerned about any of this, however.  He decided one day while my husband and I were on vacation that he didn't want to stay in the crib during his nap and climbed (and fell) out.  Luckily my mother was watching him on our video monitor and managed to mostly catch him.  This started a week of watching anxiously while he falls asleep, hoping that if he fell out that he would land on the pillows on the floor.  Sometimes he did, sometimes we caught him, and sometimes we didn't.  And that didn't stop him - so it was clear we had to move him into something lower to the ground, and fast! 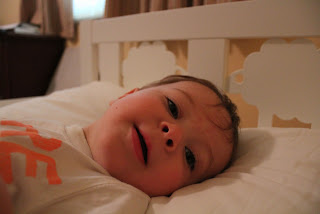 We found a youth bed at Ikea that Jamie hopped right into and said "night night!"  It was several inches lower than the toddler bed our convertible crib could change into.  I put it together in an afternoon and we tried our first night in the bed with the Dobbs brace.  We expected it to be a total disaster, but that first night had mixed success.  He fell asleep pretty well in the bed, but there were times that he fell asleep on the stuffed hippo on the floor.   We also had to help adjust him several times as he tried to go around the room and in and out of the bed.


The next day's nap was worse - he just wanted to stay up and play!  Eventually he fell asleep on the hippo, and woke up highly upset that he was on the floor.  :) 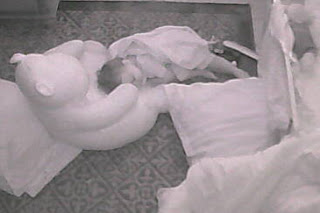 After that, every night night got better and better.  In less than a week he was sleeping his usual 11 - 12 hours a night and naps actually improved to 3 or 3 1/2 hours!  My process for the transition was to keep his bedtime routine the same but move it to the bed. I made a big deal of unveiling his new bed along with a new Elmo book a couple of days before the move, "Big Enough For A Bed."  We tell him to lay his head on his pillow after we finish our prayers and that big boys stay in their beds all night.  I still sometimes have to go in once or twice to put him or tell him to get back in his bed and go night night.  After that, I have found that I am just reinforcing the behavior if I go into his room and he always eventually sleeps in his bed.  I took out all the toys next to the bed and put them in the closet and the only books accessible are bedtime books.  I made extra double sure that everything was as baby-proofed as possible in his room.  And of course, we have a video monitor so that we can see what he is doing.
We are so proud of our big boy and how he has beautifully mastered this transition.  He wakes up very sweetly and will often get a book and climb back into bed in the morning, "reading" and singing until I come and get him.  It just makes my heart burst.  :) 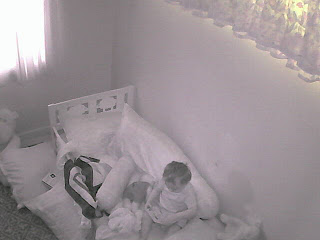 Some specific suggestions I wanted to share in looking at this next stage for your family:

Buy a cheap twin or youth size bed.
I was horrified to see the damage on the inside of my lovely wood crib, and after just a week the side rail and foot board of the youth bed were quite nicked up.  The in and out of the bed with the metal brace is very rough on the furniture and should be expected.  The distance to fall is a concern when learning to sleep in a bed, so the bed should be a low to the ground as possible.  It should be set up so one side is against a wall (if possible) and the other side have a side rail.  I know some parents of very active children who put the mattress on the floor initially.

They are more mobile than you may expect.
I had feared that he would have trouble moving around, but my son can almost walk in the brace, and has no trouble crawling around to get where he wants.  I took away the big fluffy comforter for now and just put in lots of small pillows and a small quilt.  Jamie was getting caught in the comforter but doesn't really need it yet anyway.  The pillows help cushion him against the wall, and he loves them.  He is able to get in and out without any assistance and the best part is, he knows to sleep in his bed.  That conditioning from the crib is very strong.

They may become more aware of the brace and how it is restricting movement.
Jamie has told me several times in the last couple of weeks that his shoes are boo boo and tries to take them off.  He does sometimes even fight me when I try to add the brace to the shoes.  We have stuck with it, though, because I really felt like this initial time with the bed would be crucial in setting the expectations for night night as my toddler becomes a pre-schooler.  We just had our every-3-month-appointment with Jamie's orthopedist and still have no update on how much longer he will be in the brace.  He is correcting very well, thankfully, but we had hoped to have some idea of the timeline now that he has been braced for a year and a half.

Listen to sleep signals and tire them out.
The freedom that a toddler bed offers is an understandable temptation.  I have found that getting Jamie down for naps is usually much easier and he will sleep better if I listen to his tired signals.  So when we are out doing errands and he is yawning, I have to force myself to head back rather than squeeze in one more stop.  If he gets overtired because I was stretching him he takes much longer to fall asleep, and we have actually had to wake him to make sure he would be able to sleep at night.  Doing energetic activities like going to the park in the morning also really helps tire him out so that he just wants to sleep, not stay up and play. 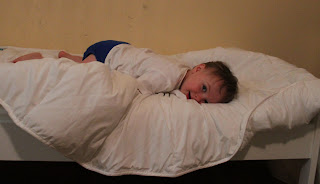 We are starting potty training and he is doing GREAT!  Trying to work this in with the brace has been interesting, so I will do another post with how that whole thing works through the perspective of raising a club foot child.

This is a guest post from Victoria, who has been a bloggin' machine for Faith Feet & Love.  She's previously written an Our Story feature as well as sharing some advice about the Importance of Humor when dealing with clubfoot.  We want to thank Victoria for writing such an awesome guest post!  If you'd like to write a guest post, please contact us for more details.
Posted by Heather Barrett at 1:38 PM