They always say that one of the main reasons for recurrence of club foot is non-compliance on the parents' part. In the beginning I always assumed I would be the exception. After all, I am the one who always follows the rules, goes to great lengths to do what's right, and would never dream of rocking the boat. But it seemed a lot easier when the doctor was explaining the treatment process of club foot to us a year ago. Or maybe I just wasn't listening.

It starts out so simply - the baby has a cold, so let's "give him the night off" from wearing the shoes and/or brace. Then it's because he learned to roll over, or crawl, or stand on his own. Or maybe there's a new babysitter, or the in-laws are visiting, or your husband just forgets. But eventually the exception has become the norm, and you are dreading the day you know has to come around sooner or later where you make the baby wear the brace. So you keep finding more excuses - daylight savings time, teething, you name it! 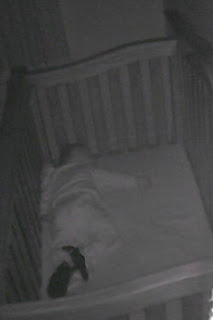 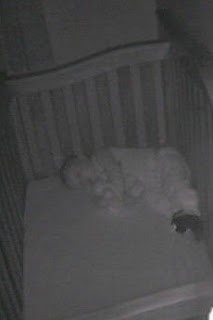 I can say all of this because I have spent months (yes, I admit it, months!) using all of these excuses. But no longer. After being recently convicted about my procrastination, I decided one day that I was going to put Jamie to bed with his Dobbs bar on, not just with the shoes like we had been doing. It didn't go well - I think he lasted until about 10:30 pm. But then the next night he slept until midnight, and the night after that was until 3:30 am. And then one morning I realized that my little angel slept all night with the brace on!

I am proud to say that my resilient baby is sleeping through the night in his full rig and is doing great. As you can see from the pictures, he still moves all around his crib. In the end, I think it was probably me who was scared of the change, not him. After all, babies crave order and routine. Eventually Jamie will know that it's time for night night when we put on his special shoes. As it is, he reaches for his brace and tries to attach it to his shoes while I'm strapping them to his feet. He doesn't love it. He probably never will! But he has accepted it. And that means that now all of us are on board for the next two (plus?) years so that his "special night time shoes" are the only remnants of his club foot treatments. We are determined not to let our non-compliance be the reason that his clubfoot comes back. So I hope my confessions help you to gather the courage to do it, stick with it, whatever your situation is. In the long run, it will seem like nothing! 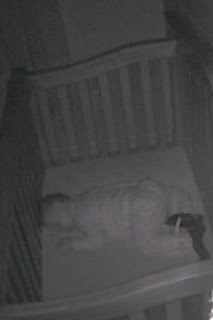 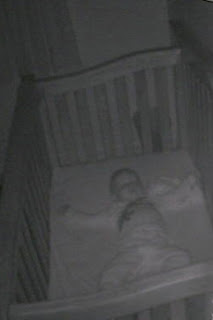 This is a guest post from Victoria, whose baby is currently not wearing the shoes again due to illness. But she promises they'll get back there!  She's previously written an Our Story feature as well as sharing some advice about the Importance of Humor when dealing with clubfoot.  We want to thank Victoria for writing such an awesome guest post!  If you'd like to write a guest post, please contact us for more details.
Posted by Eric Barrett at 6:00 PM