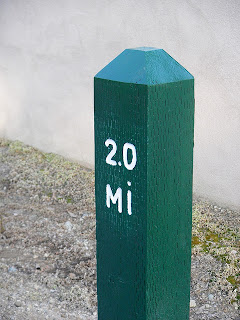 Yesterday was a big day.  It was the first trip back to the Orthopedist since Eli had his surgery.  To say we were nervous was an understatement.

As a parent lot’s of questions run through your mind: did we do it right?  Did the brace shop mess up his prescription?  (A real possibility in our case).  Are we attentive enough when he’s awake?  Should we check his braces when he’s asleep?  Is it worth waking him up to fix his braces?

Of course, our answers would have to wait.  Because after rushing to the hospital, we proceeded to wait almost an hour past our appointment.  Some days just seem to be like that!

The time wasn’t a total waste, however, because I began to realize just how much Eli has grown up.  When we first started taking him to Children’s Hospital, Eli was a week old.  We lived in fear that he would wake up and immediately start screaming.  (He only did two things back then: either slept or screamed.)  We did everything we could to keep him asleep, and an hour wait would have been an eternity with a screaming baby.

This time, though, he arrived at the hospital awake.  And he sat in his stroller calmly.  He watched people walk by.  Looked at the lights.  And drooled.  A lot.  But he was clam.  (Did I mention the drool?)

One of the issues with club foot is that it makes you live so day-to-day.  It’s hard to think ahead (let alone plan ahead) when your baby is screaming and you haven’t slept.  Just getting over the next hill seems like a miracle in and of itself.  That’s why Heather and I have lived for each milestone.  Thinking, we just have to make it to the next one.  Sometimes it’s the only thing that keeps you going.

Of course there are drawbacks to that approach.  Namely, you forget what the total journey looks like.

But back to the good news - Eli's feet looked great according to the doctor.  They told us he was doing well, and we even found out a date for switching his braces to 12 hours / day (April 27th.)

What shocked us though, was when the doctor said that we’ll need to keep coming back for visits through college.  Granted it will be every 2 years at that point, but I wasn’t really prepared to think of that.  The date in my mind has always been the day the braces come off.  But that’s not so.  With clubfoot you need to continue to monitor it, just to make sure there aren’t any future problems.

People say clubfoot is “no big deal.”  Of course these are people who don’t have a kid with clubfoot.  And of course compared to many of the terrible illnesses and conditions out there, it isn’t as “big of a deal.”  But it’s still a big deal.  And it’s something that will follow Eli (and us) through the rest of our lives.

But that’s okay.  We’re prepared for the long haul.  We’ve come this far, we know we’ll go the distance.

image provided by flickr user The Marmot
Posted by Eric Barrett at 5:59 PM