What A Broken Window Can Teach You

“Whenever God’s Spirit works powerfully to roll back the darkness by extending the Kingdom, you can count on the darkness pushing back, sometimes in subtle ways”
- Stand to Reason

I think one of Christianity’s most controversial ideas isn’t the Jesus is God. Or even that Jesus rose from the dead. I think it’s that evil is real. Most people living in today’s culture (or at least western culture) find this idea almost absurd. Not only is the idea that evil is real, shocking, but to think that evil has a personality is virtually offensive.

The idea that Satan is a “person” who intentionally works in our lives to cause harm, distraction, and mayhem is virtually enough to commit us to mental institutes.

Yet, as a Christian, I believe evil is real, and that Satan is real.

Which means that sometimes when bad things happen, it’s not God or bad luck, but an intentional attack. (Makes you wonder how many times we blame God for something bad happening, when it was Satan…)

That’s where we find ourselves this week. Ever since we made a decision to give generously to our church to make a difference in the world, we’ve had a run of terrible luck. Everything from Eli’s medical problems, to financial issues, to the latest: 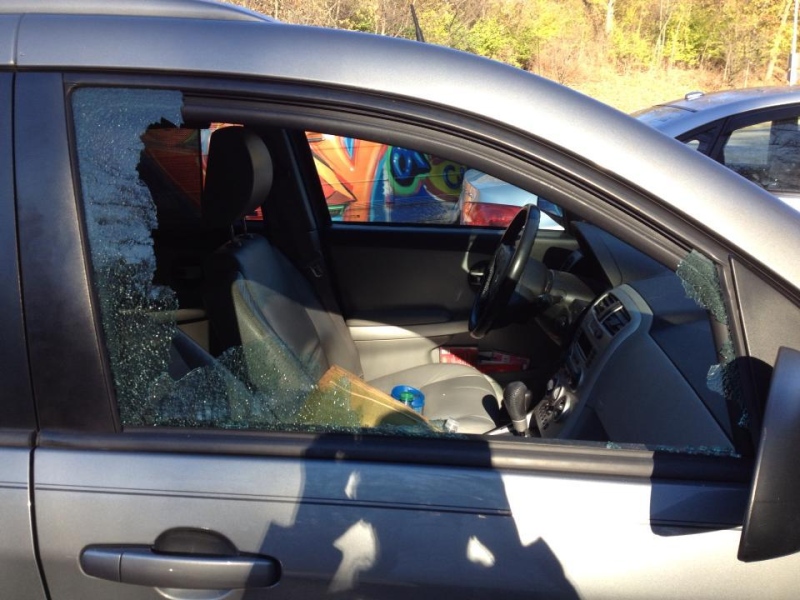 Yep. Heather’s car was broken into. They stole her purse, smashed a window, and most importantly, took all of her Starbucks gift cards. (Oh the humanity!)

When Heather called me to tell me that her car had been broken into, and her purse was stolen, I was enraged. I was angry at God. I was angry at myself. And I was angry at the criminals who did it. I was ready to bring out the firing line. The thought “there just aren’t enough public executions these days” may or may not have crossed my mind.

All because they were drug addicts, and needed their next fix (and yes the police know who they are, but they can’t keep them locked up in jail.)

The more I thought about it, the angrier I became. And I felt justified being angry.

That’s when something even worse happened. I couldn’t suppress the story of Stephen. The very first martyr of the Christian faith. Stephen was known for his powerful speaking, and gentle manner. He was a threat to the Jews of his time, because so many people believed his testimony about Jesus.

So they killed him.

By stoning him. (The kind of stoning involving rocks, not plants.)

Few deaths are more painful than being bludgeoned by rocks. And yet in the midst of this what did Stephen do? He prayed, “God, forgive them, they know not what they do.”

It’s difficult to stay angry at drug addicts who cost you a few hundred dollars in theft and car repairs when Stephen was able to forgive people who were in the process of killing him. And while I’m not over this whole incident, I am once again learning that sometimes you don’t really “believe” in something until it’s put to the test.

In the end, Satan isn’t the only one who acts in our lives. God also moves in us, and around us. Reminding us, sometimes painfully, that life is about the choices we make.
Posted by Eric Barrett at 6:00 PM

Email ThisBlogThis!Share to TwitterShare to FacebookShare to Pinterest
Labels: faith